Anthony’s Restaurant in Haddon Heights, co-owned by Restaurateur Anthony Iannone and Chef John Pilarz, was meant to be. Through high school and college, Chef John worked part-time in the Washington Township, NJ restaurant Anthony opened in the 1980’s.

Anthony, who trained under Italian Chef Aldo, notes that his training was more hands-on, as opposed to Chef John’s formal training, who attended ACC and went on to spend the early part of his career at Trump Plaza, followed by The Old Wood Way in Atlantic City, NJ.

“Chef Aldo taught in Italy, so he had a different way of looking at things. Food in Italy is a passion and a culture on its own for them. Chef John learned a lot of technique, with a French background, while I learned how to work with food. The two styles complement each other and allow us to work well together.”

After leaving Atlantic City, Chef John returned to work with Anthony in the early 1990’s and the duo had been working together for another 10 years when the opportunity to own and operate their own restaurant arose.

Anthony’s restaurant was opened in 2000 by Chef John along with his partner and former boss, Anthony.  At this delicious Italian restaurant, “it’s about the food” and you can tell, from your first bite to your last.

“My father lived in Italy for 18 years in Puglia, on the Adriatic side, right above the heel if you look at the boot of Italy. He was a butcher by trade and did that for 40 years. We brought a lot of the authentic Italian passion for food back to Anthony’s.”

Today, with over 40 years in the food industry, Chef John and Anthony Iannone are sharing their favorite products and pro tips from the popular southern New Jersey restaurant. 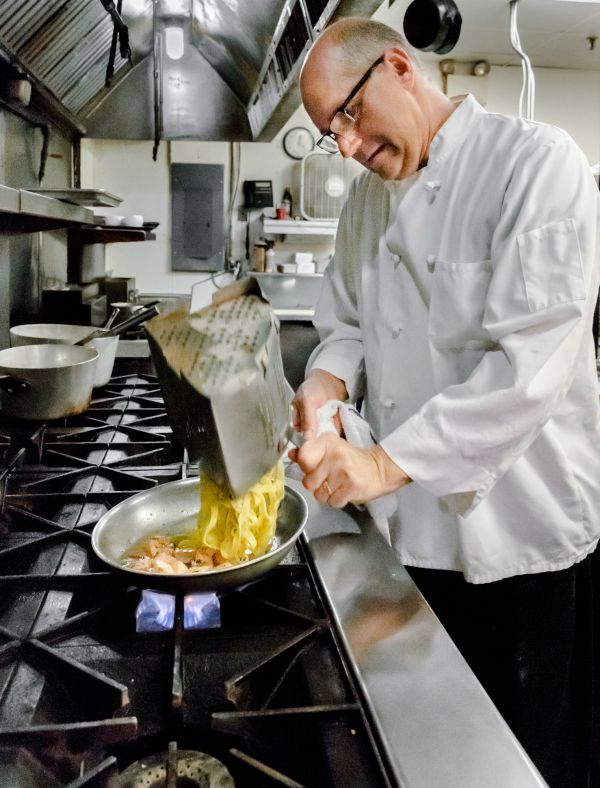 “When people come in to dine for the first time, I tell them to try the prime pork chop. It’s the best. And, we’ve been using the salmon forever too; ever since Rastelli has offered that product.”

The restaurant thrives on customer feedback, especially if something new is being added to the menu. If the feedback isn’t good, the team isn’t shy about changing the product or the preparation.

There are many ways to prepare their favorite menu items, but here, Chef John and Anthony Iannone share some of their unique prep ideas.

Rastelli Salmon (featured item): Rastelli’s celebrated Faroe Islands Salmon is served over fresh vegetables, like asparagus, with fingerling potatoes and a lemon garlic aioli for the dinner summer menu. On the lunch summer menu, large-dice cubes of salmon are served on a bed of basil garlic pasta and heirloom tomatoes. The dish is finished with a lemon olive oil to keep it really light and summery. Another preparation that the restaurant has featured is a Pesto Crusted Salmon, blending Panko bread crumbs with basil, oregano and parsley to make the pesto crust. 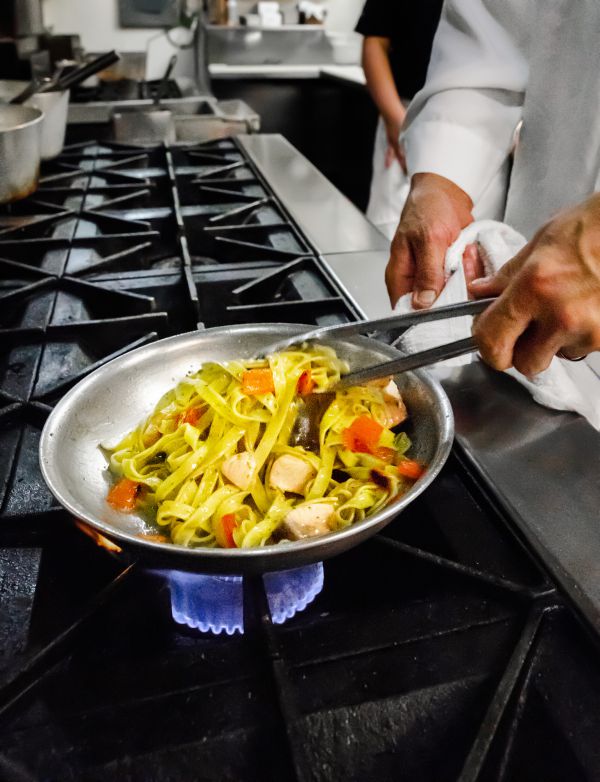 “Faroe Islands Salmon is always on the menu, but we like to change it up 4-5 times per year and keep it seasonal, since it’s a versatile product. We do grilled salmon, we do roasted salmon. Earlier this Summer we did a salmon dish over ratatouille for dinner and grilled salmon over Julienne vegetables, with a maple balsamic glaze on top for lunch.”

Chef Tip: The Faroe Islands Salmon has such a high fat content that you really can’t over cook it, but one thing that chefs and home cooks have to watch due to the high fat content is that if they grill it, it should be grilled quickly and finished in the oven. “At Anthony’s restaurant, we grill it quickly, twice on each side, and then finish it in the oven to avoid that issue. You also have to watch the flare up on this salmon.” 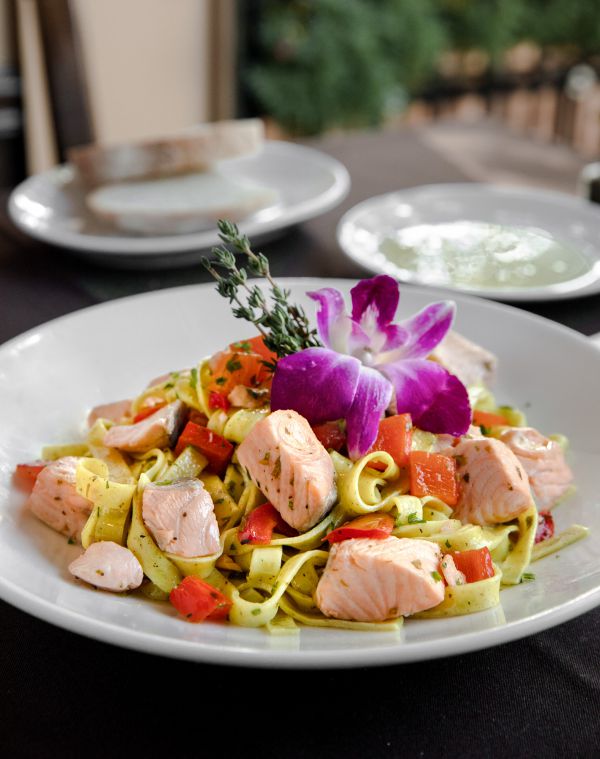 Anthony’s restaurant uses Facebook Live to attract and educate customers and fans. Averaging 1 Facebook Live segment every 2 weeks, they are able to show people unique and different ways to use products, providing creative and simple options that viewers really engage with.  The segments are 25-45 minutes and they do anywhere from 4-5 dishes featuring the product for that week.

Recent Facebook Live segments have included what to do with Salmon and how to use leftovers. 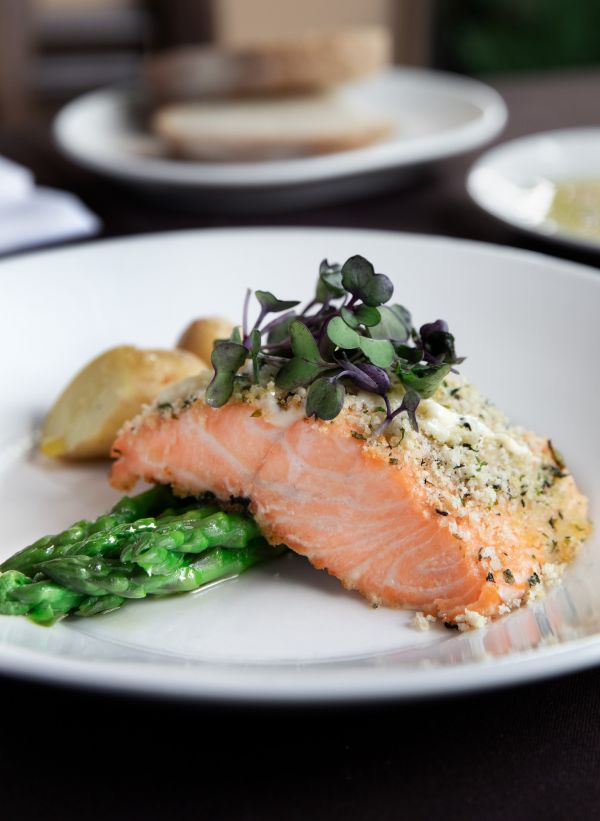 Another promotion that Anthony’s restaurant favors is the prix-fixe menu. Offering 3 Courses for $30, prix-fixe menus are a good promo for slower times of the year to keep the kitchen busy, the front of the house active and bring new customers through the door.

Anthony and Chef John have been loyal clients of Rastelli Foods Group and friends of Ray Rastelli for nearly 20 years.

“We’ve known Ray forever. We used to go to the old plant on Delsea Drive in Deptford, NJ to pick up products. That’s how we met Ray, when he was first starting.”