Rocco’s at the Brick

Executive Chef Cole Caprioni of Rocco’s at the Brick has been in the restaurant business for all of his life, dropping his first batch of chicken fingers into the fryer at just 9 years old. With a father who has been with the same family-owned candy maker for over 30 years and a mother who has held nearly every restaurant position from waitress and host to manager and bartender, Chef Cole was destined for a culinary career.

Knowing from such a young age that he wanted to cook, Chef Cole opted for his high school’s 4-year vocational program, designed to prepare him with the fundamentals for culinary life, complete with a publicly open restaurant and long days of prep work. Hired right out of the program, Chef Cole went to work in some very unique and demanding kitchens, including nearly 10 years with Nordstrom’s restaurant division where he had the opportunity to open up and remodel locations.

Applying that knowledge of what it takes to get a restaurant off the ground from nothing has been put to good use as Chef Cole and his partners opened Rocco’s at the Brick. When he received a phone call out of the blue asking if he wanted to open a restaurant from his partner Alex Mastoris, who had recently sold his renowned diner and at the time was retired, he was a little reluctant.

Eventually, Chef Cole cooked for Mastoris, impressing him and his partners with the food and his menu concepts. Despite opportunities for advancement at Nordstrom, Chef Cole was sold on the idea when Mastoris told him they planned to name the restaurant Rocco’s at the Brick. Rocco is the name of Chef Cole’s son and if he wasn’t sold before, the name sealed the deal.

Rocco’s at the Brick is located in historic Newtown Pennsylvania’s Brick Hotel, a charming inn, originally built in 1763. Launching a restaurant in such a well-known (and allegedly haunted) spot, filled with memories for so many people is no small task. Rocco’s at the Brick pays homage to its historic past (including famous guests like George Washington and Ben Franklin) by offering a great list of bourbon whiskey, classic cocktails and high-end menu items from premium meats to world-class seafood.

The Rocco’s at the Brick menu features high-end steaks, include filets and a 48-ounce porterhouse for 2 from Rastelli Foods.

“We tried other purveyors, and nothing stood up to Rastelli’s. It was the best. It’s killer.  They’re sized fairly evenly, cook very evenly. [The porterhouse] is our show piece. This is the backbone of our menu.” 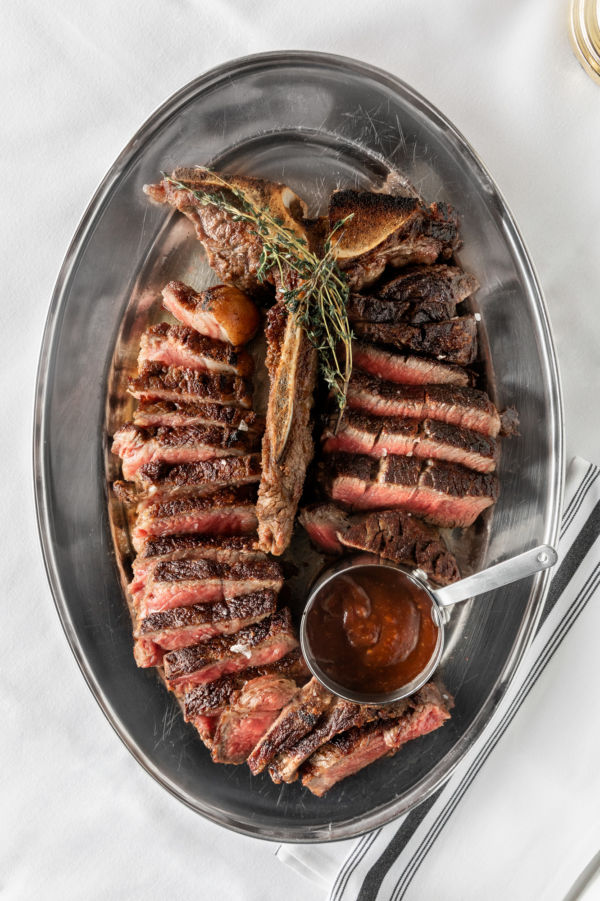 The Porterhouse is Chef Cole’s favorite piece on the menu and from a consistency standpoint, he has yet to have an issue.

“I like cooking them, serving them, and there is a wow factor when it hits the table. This is everything I love about what we are doing. After years of fussy plates and tweezers and stuff like that, it’s just nice to have meat and fire and fat. It’s the best. It’s real.”

It’s an approach that their customers appreciate and though the menu changes twice a year, the Rastelli steaks stay on consistently. Rocco’s at the Brick receives a lot of feedback on the quality of the meat, with many customers claiming it’s the best steak they’ve ever had.

“That’s a butter knife cutting that 12-ounce filet right there. When you’re getting good product like that, there is really not much you have to do it.”

ABOUT OUR PARTNERSHIP WITH RASTELLI

“Shout out to Marc Raffa because he is awesome and one of my favorite people! I cannot say enough good things about Marc. Just knowing that your Rastelli Rep is someone who worked on this side of the fence goes a long way. I love the product and the close family dynamic that Rastelli has. It’s similar to what we do here.”

We like to reverse sear. So, when we get an order in for a steak, we will season it and throw it right into the broiler until it is right at about temperature, let it rest for the remainder of the app or salad course and then when we get the fire slip, it goes onto a sear top with brown butter down on the sear top to form a crust on the outside and warm it back up.

Using brown butter instead of clarified butter to both sear and finish gives you a really nutty almost hazelnut flavor. Also, the heat on the sear top gives a nice crust.